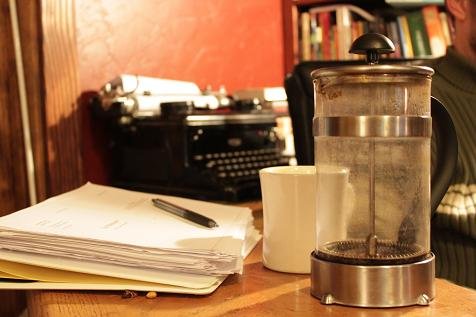 Where I’m at and Where I’m Going

Writing and I have a long history together. Best friends through grade school and high school, sometimes my only companion through hard times. We were like this (holds up two fingers, crossed) long nights spent over the scratching pencils and clicking keys, pouring reams of paper into the inferno of our love affair. We seemed destined to spend our lives together… then it happened. I don’t know which of us it was who took the first step away or why, but it happened. A distance, which only grew. Then, one day, Writing wasn’t there when I called.

We argued, we went to therapy, we tried to force it to work, we even had a book to keep us together, then another one, then a contract, but it doesn’t work if you force it.

Then came the trial separation…

If you look back through this blog (or the old, original, blog) you will notice that until yesterday when William Goldman died, I effectively stopped blogging back in 2016. Posts from 2017 were mostly rehashing things I’d written before — that ‘Trying to Make It Work By Forcing It‘ phase.

There are many Reasons why Writing and I became estranged.

My mom died not long after Howard Carter came out, publishing was not at all what I’d imagined, and there were problems at the publisher with the rollout of Howard Carter that I felt pulled the rug out from under it before it could find its footing… and I just plain lost heart at some point. The list goes on. Things piled up, the logjam of issues began to feel insurmountable, and one day, I reached out and Writing just wasn’t there.

It’s hard when the one thing you’ve come to depend on to help you make sense of the world abandons you at the moment when you most need it. In the wake of my mother’s death, I simply couldn’t put two words together. Losing her was too big to pin down to a piece of paper with such a piddling thing as ink.

I couldn’t believe it.

And like Tinkerbell, belief is what keeps writing alive. My moment of doubt was enough to weaken Writing and all the clapping of all the children in all the world wasn’t enough to wake our relationship up again.

I tried to fake it for a time. I still knew how to put words one in front of the other. I had the mechanics of the thing, even if I was just going through the motions. I wrote an entire novel that way, but it was a soulless thing, written without love, bouyed if at all, by trying to keep that #amwriting hashtag associated with my Twitter account. Someone even offered to publish it, but I said no. It is work which will never see the light of day.

A book isn’t just a conglomeration of words and plot. At its best, it’s a bit of life, captured in ink and bound to a piece of paper (or a computer screen in many cases) and there’s more to it than methodically composing sentences to fullfill a wordcount promise.

Strangely, that is what finally brought Writing and I back together.

While we were apart I found other ways to process the world around me, translating the things I used to put into words into physical objects. It was a return to form for me, for all intents and purposes retreating from the world by putting craft between me and the rest of humanity. It’s not as elegant or efficient a way of processing the world and it’s arguably an older form than writing. I would go to work each day and complete my tasks and come home to my workshop and Make Neat Stuff.

Sometimes you find each other when you get past the place where “I can’t live without you” is replaced with life, plus an empty space that the other used to fill. Then you find a reason to believe again and Tinkerbell rises from the stage. Weirdly, it wasn’t a novel that brought me back, it was Making Neat Stuff and wanting to tell people about how I did it and why I did it and what it meant to me… I needed Writing again and when I reached out, I found it waiting for me.

A long time ago, before most of this happened, I set out to do one of those “Live for a year under these ridiculous conditions and then write about it” books. For me, I was going to learn all the crafts Represented by the Guilds of London, circa 1590. Yeah.

It started, believe it or not, with a mid-sentence epiphany while reading Kitchen Confidential the memoir written by the late, great, Anthony Bourdain. I would learn these crafts, learn about the craftspeople who made their living by them, and I would learn more about the modern world as I went.

It was a hairbrained scheme that failed entirely… which is when it got interesting.

What Writing and I found is a place beyond arbitrary deadlines, a place of craft and creation, a place without judgement at a pace where I could feel my way forward without disappointing myself or anyone else. It was… it is a place where I embraced the fact that failing is a better story than succeeding. A place where I would still be able to find stories for us to tell on a regular basis.

You can find it at RenaissanceArtisan.com where I am currently reinventing all of the wheels as I teach myself bookbinding.

There are no robots or mad scientists there; I’m sorry. Maybe someday those characters will begin to whisper stories in my ears once more. For now, my fiction writing has moved into the same meditative and methodical approach to craft that saved me when Writing and I were apart. Writing and I have passed beyond the torrid love affair, burning-the-candle-at-both-ends-plus-the-middle, stage and found the companionship that sustains us both on the other side.

We’re no longer keeping it together for the kids.

And there are many more stories left to tell.

This site uses Akismet to reduce spam. Learn how your comment data is processed.